What are the differences between the 8 indoor RTLS technologies？

So, how to solve the indoor positioning problem? 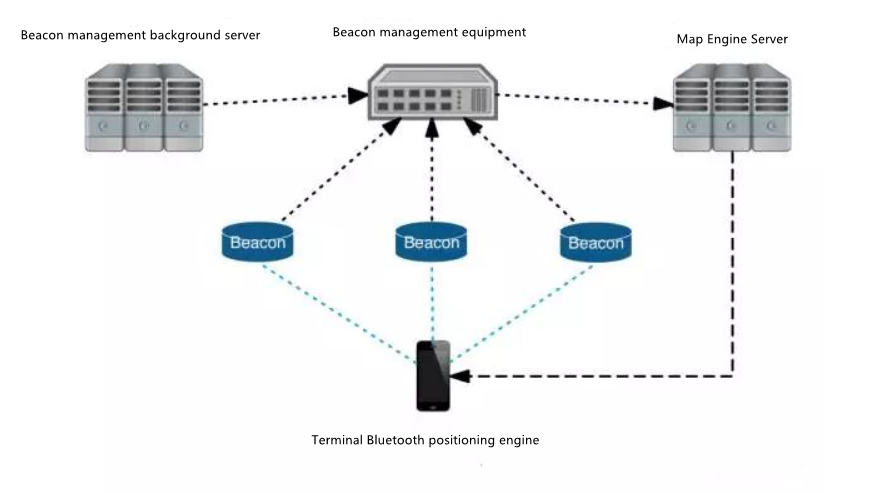 At present, there are two main methods for Bluetooth iBeacon positioning: RSSI (Received Signal Strength Indication) and fingerprint positioning, or a combination of the two.

The biggest problem based on the distance is that the indoor environment is complicated, and Bluetooth, as a 2.4GHZ high-frequency signal, will be greatly interfered. In addition to the various indoor reflections and refraction, the RSSI value obtained by the mobile phone does not have much reference value; at the same time, in order to improve the positioning accuracy, the RSSI value has to be obtained multiple times to smooth the result, which means Increase in latency. The biggest problem based on fingerprint positioning is that the labor cost and time cost of obtaining fingerprint data in the early stage are very high, and the database maintenance is difficult. And if new base stations are added to the mall, or other modifications are made, the original fingerprint data may no longer be applicable. Therefore, how to make trade-offs and trade-offs between positioning accuracy, delay and cost has become the core issue of Bluetooth positioning.

The mainstream Bluetooth positioning accuracy in the market is that 70% of the lots are within 2 meters, and some companies can achieve 90% of the lots within 2 meters. At present, the mainstream Bluetooth positioning technology on the market is based on the triangulation algorithm. The signal strength of the surrounding Bluetooth base stations is obtained through the mobile phone, and then some other auxiliary methods such as weighted average algorithm, time weighted algorithm, inertial navigation algorithm, Kalman filter algorithm, Gaussian filtering algorithm and so on to calculate the current position.

Advantages: small size, short distance, low power consumption, easy to integrate into mobile devices such as mobile phones; Disadvantages: Bluetooth transmission is not affected by line-of-sight, but for complex space environments, the stability of the Bluetooth system is slightly worse, and it is affected by noise The signal interference is large and the price of Bluetooth devices and equipment is relatively expensive;

Application: Bluetooth indoor positioning is mainly used for small-range positioning of people, such as single-story halls or shops. 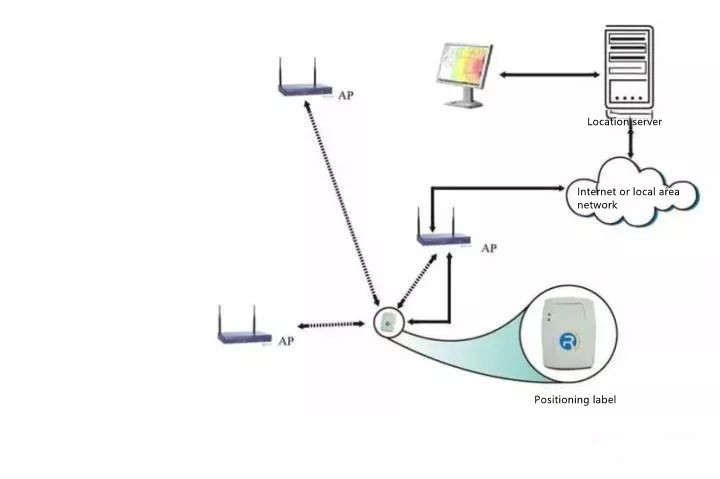 Radio frequency identification (RFID) indoor positioning technology uses radio frequency, a fixed antenna modulates the radio signal into an electromagnetic field, and the tag attached to the article enters the magnetic field and induces current to generate the data and transmit the data. Multiple pairs of two-way communication exchange data to achieve identification and triangle The purpose of positioning.

RFID is a wireless communication technology that can identify specific targets and read and write related data through radio signals without the need to establish mechanical or optical contact between the identification system and specific targets.

The radio signal is an electromagnetic field tuned to a radio frequency to transmit data from the tag attached to the item to automatically identify and track the item. Some tags can obtain energy from the electromagnetic field emitted by the recognizer during identification, and do not require a battery; some tags have their own power source and can actively emit radio waves (electromagnetic fields adjusted to radio frequencies). The label contains electronically stored information and can be identified within a few meters. Unlike the barcode, the radio frequency tag does not need to be in the line of sight of the recognizer, and can also be embedded in the tracked object.

Advantages: Radio frequency identification indoor positioning technology has a very short range of action, but it can obtain centimeter-level positioning accuracy information within a few milliseconds; the size of the tag is relatively small and the cost is relatively low.

Disadvantages: No communication capabilities, poor anti-interference capabilities, inconvenient integration into other systems, and user safety and privacy protection and international standardization are not perfect.

Application: RFID indoor positioning has been widely used in warehouses, factories, and shopping malls for goods and commodity circulation positioning.

ZigBee (low-power local area network protocol based on IEEE802.15.4 standard) indoor positioning technology forms a network through several nodes to be tested, reference nodes and gateways. The nodes to be tested in the network send out broadcast information, and from each neighboring reference The node collects data and selects the X and Y coordinates of the reference node with the strongest signal. Then, the coordinates of other nodes related to the reference node are calculated. Finally, the data in the positioning engine is processed, and the offset value of the nearest reference node is considered, so as to obtain the actual position of the node under test in the large-scale network. 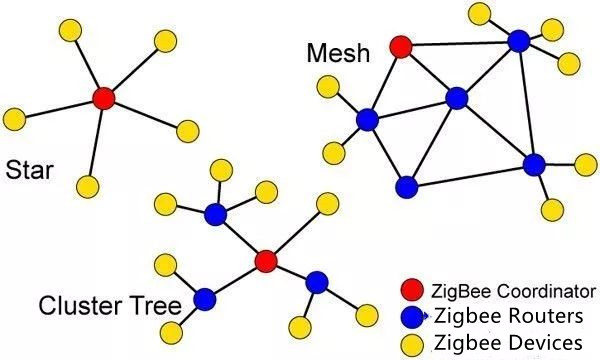 Disadvantages: the transmission rate is low, and the positioning accuracy requires a higher algorithm. 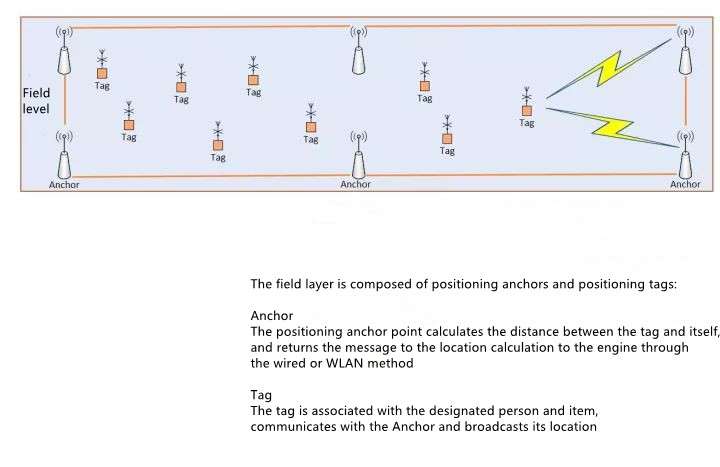 Ultra-wideband wireless (UWB) technology is an indoor high-precision wireless positioning technology proposed in recent years. It has a time resolution of up to nanoseconds. Combined with a distance measurement algorithm based on the time of arrival, it can theoretically achieve centimeter-level positioning accuracy, which can meet Positioning requirements for industrial applications.

The whole system is divided into three layers: management layer, service layer and field layer. The system level is clearly divided and the structure is clear.

The scene layer is composed of positioning Anchor and Tag:

The positioning anchor calculates the distance between the Tag and itself, and sends the message back to the position calculation engine through wired or WLAN.

The tag is associated with the located person and object, communicates with the Anchor and broadcasts its location.

Advantages: It has a GHz-level bandwidth, high positioning accuracy; strong penetration, good anti-multipath effect, and high security. Disadvantages: But because the newly added blind nodes also need to actively communicate, the power consumption is high, and the cost of the system is high;

Application: Ultra-wideband technology can be used for radar detection, as well as for indoor precise positioning and navigation in various fields.

There are two types of infrared indoor positioning. The first is to use the infrared IR mark as the moving point of the target to be positioned, which emits modulated infrared rays, which are received by an optical sensor installed in the room for positioning; the second is to use multiple pairs of transmitters and receivers. The woven infrared net covers the space to be measured and directly locates the moving target. Advantages: high indoor positioning accuracy, strong anti-interference ability;

Disadvantages: Infrared rays can only be transmitted by the line of sight, and the penetration performance is extremely poor. When the logo is blocked, it cannot work normally, and it is also very susceptible to environmental factors such as lights and smoke;

The transmission distance is not long, so that in the layout, no matter which method, it is necessary to install the receiving end behind each block or even at the corner. The layout is complicated and the cost is high.

Application: It is suitable for the accurate positioning and recording of the trajectory of simple objects in the laboratory and the position positioning of indoor self-propelled robots. 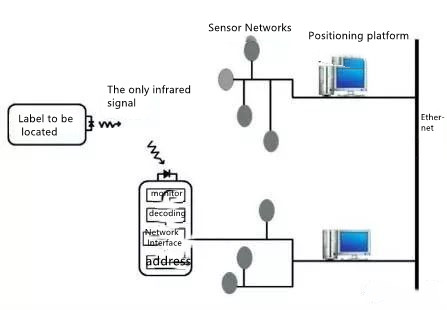 Ultrasonic positioning technology is developed based on an ultrasonic ranging system, which consists of several transponders and a main rangefinder: the main rangefinder is placed on the object to be measured and transmits the same radio signal to a fixed transponder, and the transponder is receiving After the signal is received, the ultrasonic signal is transmitted to the main rangefinder, and the position of the object is determined using algorithms such as reflection ranging and triangulation. Advantages: The overall positioning accuracy is very high, reaching the centimeter level; the structure is relatively simple, there is a certain degree of penetration, and the ultrasound itself has a strong anti-interference ability.

Disadvantages: The attenuation in the air is large, which is not suitable for large-scale occasions; the reflection ranging is greatly affected by the multipath effect and non-line-of-sight propagation, which causes the investment in the underlying hardware facilities that require accurate analysis and calculation, and the cost is too high.

iBeacon is a new type of accurate indoor micro-positioning technology based on Bluetooth 4.0. Currently, iOS, Android, Windows and BlackBerry system devices are equipped with Bluetooth Low Energy Technology (BLE). When your handheld device is close to an iBeacon base station, the device can sense iBeacon signals (UUID and RSSI), ranging from a few millimeters to 50 meters, and the precise position can be obtained through the weighted three-loop positioning algorithm, which can reach 2m in general Accuracy.

iBeacon is a low-power, low-cost signal transmitter proposed by Apple that can be detected by nearby handheld electronic devices. It can be used in an indoor positioning system. This technology allows a smart phone or other device to execute corresponding commands within the sensing range of an iBeacon base station.

This is an application that helps smartphones determine their approximate location or environment. With the help of an iBeacon base station, the smartphone software can roughly find its relative position to the iBeacon base station. iBeacon allows mobile phones to receive notifications of nearby merchandise, and also allows consumers to complete payment on POS machines at the point of sale without having to take out their wallets or credit cards. iBeacon technology is implemented through Bluetooth Low Energy (BLE), also known as Bluetooth Smart.

iBeacon is an app or operating system that uses the function of Bluetooth Low Energy to be able to sense in close proximity to transmit a universal unique identification code. This identification code can be found on the Internet to determine the physical location of the device or can trigger an action on the device such as sign in on social media or push notifications.