How to realize sign-in and clock-in via bluetooth ibeacon

With the continuous update and improvement of Bluetooth specifications, its key characteristics such as power consumption, distance, connection speed, and broadcast packet length have been continuously improved, and market demand has been continuously tapped, which in turn has spawned a wider range of scene applications.

So how to use the Bluetooth ibeacon to realize the check-in and clock-in to and from get off work?

The principle of the solution is to scan and broadcast via Bluetooth, and one-way data transmission can be realized without establishing a Bluetooth connection. The APP installed on the employee's mobile phone scans the broadcast signal of the fixedly deployed Bluetooth ibeacon device to realize the clocking in and out function, which can meet the requirement of multiple mobile phones to scan the same ibeacon device at the same time. In the application of Bluetooth connection, it is more point-to-point. In the office scene, the clocking in and out of get off work are concentrated at the same time. Obviously, the wired application is not suitable. 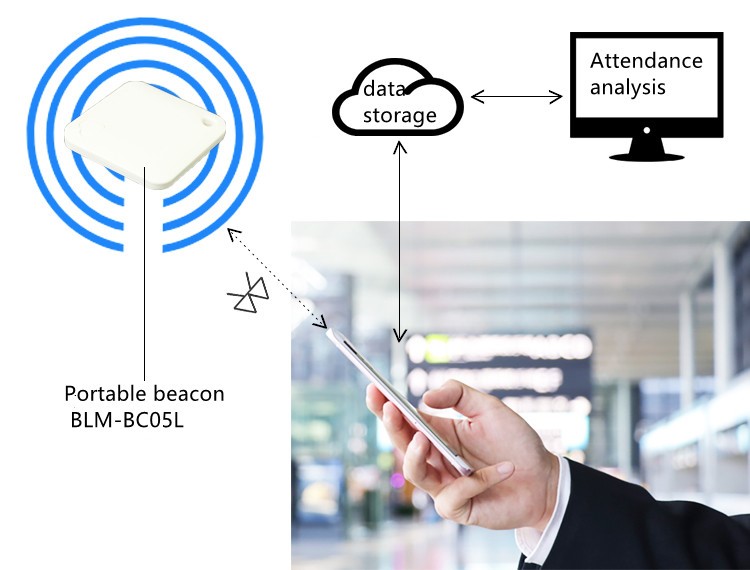 iBeacon is a new function equipped on the mobile device OS (iOS7) released by Apple in September 2013. iBeacon uses BLE technology. Specifically, it uses a broadcast frame called "Advertising" in BLE. Announcement frames are frames that are sent periodically and can be received by devices that support BLE. iBeacon is implemented by embedding data in Apple's own format in the payload part of this notification frame. The way it works is that a device equipped with Bluetooth Low Energy (BLE) communication uses BLE technology to send its own unique ID to the surroundings, and the application software that receives the ID will take some actions based on the ID.

How to prevent false punch cards?

Traditional check-in schemes mostly use RFID technology, which is easy to cheat. Often people do not need to go to the scene and can still attend attendance. They only need to hold a badge to check-in on their behalf. Late arrivals and early departures cannot be effectively supervised. It takes a lot of time and energy to investigate and manage. low efficiency. With the help of Bluetooth technology, this pain point will be effectively solved under the premise of low cost and easy deployment.

For Bluetooth check-in, the employee's mobile phone must turn on Bluetooth. The mobile phone obtains the broadcast information of the locally deployed Bluetooth device and reports it to the background through the APP to form a check-in record, otherwise the check-in is invalid.