What is the principle of Bluetooth audio transmission？

Both mp3 and flac audio coding are obtained by secondary coding on the basis of PCM audio coding, for reducing the file size. Then, during audio playback, it is necessary to restore data in mp3, flac and other encoding formats to data in PCM encoding format. This process is called decoding. Then it turns into an analog signal through digital-analog conversion (DAC), and finally drives the speaker through an amplifier circuit to play the sound. 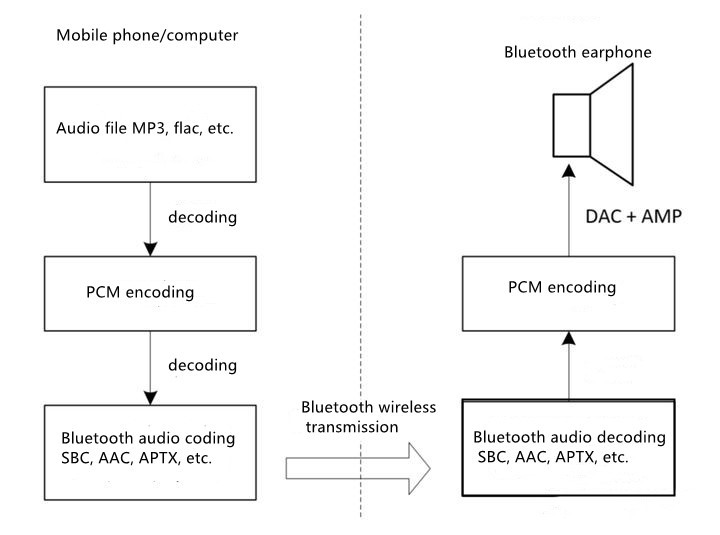 For wireless systems, the transmission of audio data must comply with the wireless communication protocol. As shown in the above diagram, in the Bluetooth system, the transmitter must re-encode the PCM code into a code supported by Bluetooth. After the receiver receives it, it will Its decoding is PCM encoding. In the entire system, the factors that affect the sound quality are: sound source quality (lossy encoding is different from lossless encoding), Bluetooth audio encoding, Bluetooth signal quality, headset quality (speaker and sound cavity design, etc.).

As a wireless communication technology standard, Bluetooth stipulates in its A2DP (Advanced Audio Distribution Profile): SBC is a code that must be supported, and the rest have three optional codes. In addition, manufacturers can also develop their own codes.

As above sheet, mp3 (full name MPEG-1 or MPEG-2 Audio Layer III) and AAC encoding are optional encoding. In addition to the SBC encoding that must be supported, the most currently supported encoding for Bluetooth chips is AAC, followed by AptX, and LDAC and LHDC are less.

The principle is: divide the audio signal into subband signals of different frequency bands through a band-pass filter, and then convert these signals into baseband signals through frequency shifting, then sample, quantize and encode them separately, and finally synthesize a total code stream for transmission go out.

The advantage is abandon or reduce the frequency parts that are not sensitive to human hearing, and use finer quantization at sensitive frequencies to obtain better auditory effects under low bit rate conditions.

A2DP stipulates that the maximum bit rate supported by SBC encoding is 320kbps for mono and 512kbps for stereo. But according to its recommendation, in fact, the most used stereo transmission is 44.1KHz, 328kbps.

AAC stands for Advanced Audio Coding, advanced audio coding, built in 1997, based on MPEG-2 technology. It was updated on the basis of MPEG-4 in 2000.

As the successor of mp3, the improvements of AAC compared to MP3 include more sampling rate options (8 kHz to 96 kHz, and 16 kHz to 48 kHz for MP3); a higher upper limit of the number of channels (48, MP3 in In MPEG-1 mode, it is up to two channels, and in MPEG-2 mode is 5.1 channels); arbitrary bit rate and variable frame length.

AAC is a high compression ratio audio coding, which mainly adopts two strategies: discarding signal components that have nothing to do with perception, and removing redundant parts of the encoded signal. In fact, the effect of AAC encoding is the best below 128Kbps bit rate. Dolby Laboratories believes that: AAC format performs better than 128Kbps MP3 format at 96Kbps bit rate; the same is 128Kbps, and the sound quality of AAC format is obviously better. In MP3.

The bit rate commonly used by AAC in Bluetooth is 256Kbps. But there is one point, even if the AAC audio source is used, Bluetooth cannot directly transmit its original data stream. Instead, it first decodes AAC into PCM, and then encodes it into the AAC code supported by Bluetooth before transmission. In terms of application, the biggest supporter of AAC encoding is Apple. Devices such as iPhone, iPad and AirPods all support AAC. Many of the music in the iTunes software are also stored in AAC encoding format.

aptX was originally called apt-X, CSR acquired it in 2010 and renamed it aptX, and CSR was acquired by Qualcomm in 2015.

The design of aptX is based on the principle of adaptive differential pulse code modulation (ADPCM), and does not use psychoacoustics or masking effect technology (used in mp3, SBC, AAC). There are currently four versions of aptX, the comparison is as follows:

The four versions of aptX have their own strengths. aptX is the most basic version. aptX Low Latency is abbreviated as aptX LL, which is characterized by low latency. In fact, the limit of the delay that the human ear can feel is 70ms, and reaching 40ms means that we will not feel the delay. aptX HD focuses on high-definition audio, the transmission rate has been greatly increased, and it has a higher signal-to-noise ratio and less distortion. And aptX Adaptive, just like its name, can automatically adjust the transmission bit rate and delay as needed. aptX Adaptive is backward compatible with aptX and aptX HD.

The following is a comparison chart from Sony’s official website. It can be seen that Hi-Res audio is transmitted through LDAC encoding, which can also restore high sound quality better, while SBC is inferior. 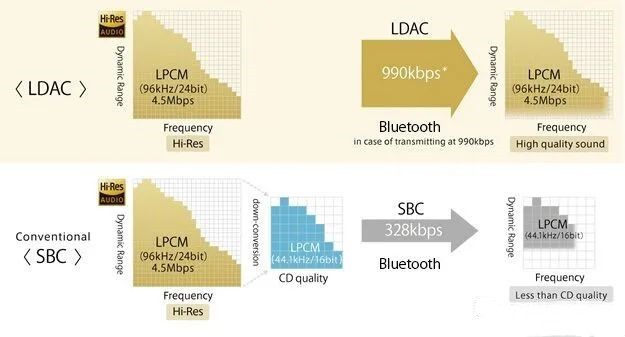 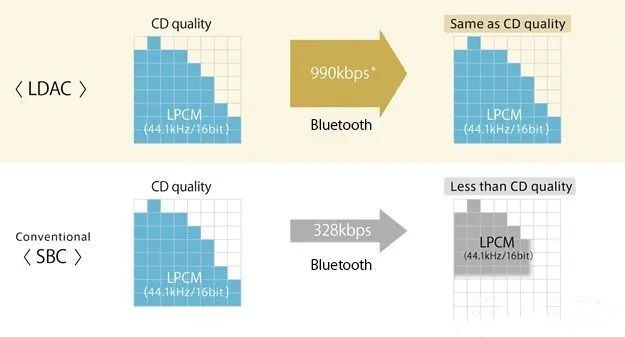 In fact, in the previous two comparison pictures, Sony has the suspicion of exaggerating the LDAC technology. Figure 1. For 4.5Mbps Hi-Res audio, to transmit through the highest bandwidth of 990Kbps, the compression ratio needs to reach 1:4.5, and the current best lossless compression ratio is only 1:2. In fact, LDAC is a lossy encoding. Even if it is finally restored to 96KHz/24bit, 4.5Mbps audio on the headphone end, the parameters are the same as the sender, but its content is obviously not as good as the original. So, LDAC can transmit CD-level sound quality, but it cannot transmit Hi-Res audio losslessly, it can only be close (the degree is unknown).

The full name of Hi-Res Audio is High-Resolution Audio, which is generally translated as high-resolution audio. It was originally a marketing term for music and audio equipment vendors. It usually means better sound quality than CD (sampling rate higher than 44.1KHz or high bit depth) At 16bit) audio.

In 2014, the Japan Electronics and Information Technology Industries Association (JEITA) defined the term Hi-Res Audio, which means an audio whose sampling frequency or quantization number exceeds the CD specification.

According to the definition of JEITA, Japan Audio Society (JAS) proposed the "Hi-Res Audio" certification standard, which requires the frequency response of microphones, amplifier circuits and speakers to be greater than 40KHz, and the digital process requires specifications of 96KHz/24bit and above, Is a series of regulations for products. For wireless products, additional requirements must be met. For example, audio coding recognized by JAS must be used. Currently, there are only two types of LDAC and LHDC.

LHDC supports the transmission of 24bit/96kHz streaming audio (also known as high-resolution audio) through a Bluetooth connection with a speed of up to 900kbps. Unlike LDAC, which will first up/down the original audio frequency to 24bit/96kHz, LHDC can output according to the original sampling rate, reducing the delay of the SRC process. In September 2019, LHDC passed the Hi-Res Audio Wireless standard certification of JRS.

LHDC supports the bit rate of 400/560/900 kbps according to the signal situation. There is also a low-latency audio codec (LLAC) version, also known as LHDC LL, with an end-to-end delay of about 30 milliseconds.

In application, starting from Android 10, LDAC has joined the Android Open Source Project.

The full name of HWA is Hi-Res Wireless Audio. It is a certification standard based on LHDC audio coding technology, not Bluetooth audio coding. Its nature is the same as the Hi-Res Audio Wireless standard led by the Japan Audio Society (JAS). The picture below is the HWA logo:

HWA also refers to the HWA Alliance, which is called the HD Audio Wireless Transmission Standards and Industry Alliance. It was established in September 2018. The HWA Alliance is led by Huawei and the China Audio Association. Huawei is a technology promoter of mobile phones and a core member of the alliance, but it is not a technology leader. The technology leader is Taiwanese manufacturer Savitech.

The attitude of the HWA Alliance is relatively open. It only needs to meet the requirements of performance indicators and other aspects to apply for HWA certification. HWA certification is divided into platinum level and gold level: 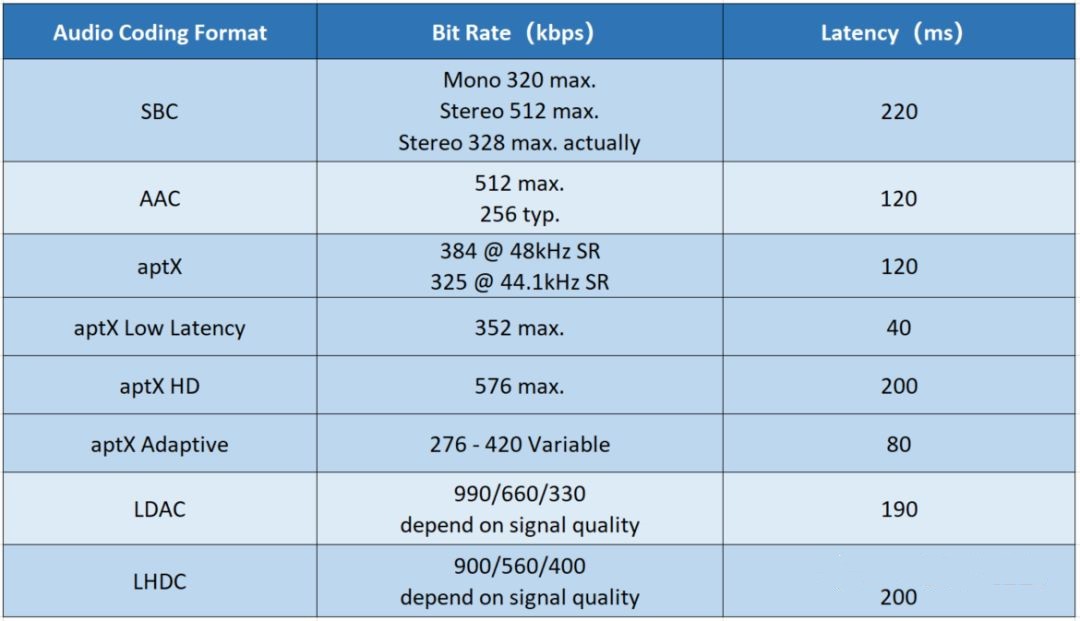 SBC is the only encoding supported by Bluetooth. The encoding scheme is relatively simple, but the bit rate is low, the compression rate is high, some details are lost, and the sound quality is average.

The bit rate of AAC is comparable to that of SBC, but thanks to better coding technology, even at the same low bit rate, AAC's hearing is better than SBC and MP3.

The transmission bit rate of Aptx is slightly higher than that of the previous two. At the same time, more efficient encoding allows more audio details to be preserved, and the listening experience is better than SBC and AAC. aptX HD already belongs to high-definition audio coding.

LHDC is similar to LDAC, they can transmit audio with higher sound quality than CD, with a transmission bit rate of 900Kbps, which is currently the best Bluetooth audio codec with sound quality.

In the actual application of Bluetooth encoding, what aspects should we pay attention to?

The SBC coding specification is part of the Bluetooth protocol. All Classic Bluetooth (different from BLE) support SBC, which ensures the voice interconnection and intercommunication of all Bluetooth devices. In other words, all mobile phones and headsets that support classic Bluetooth can at least use SBC encoding to transmit audio to each other.

For other audio coding, you need to support both the mobile phone and the headset. If it is not satisfied, the SBC coding is still used.

Apple mobile phones are an important supporter of AAC. Devices equipped with iOS use AAC by default, and due to the closed nature of iOS, Apple mobile phones cannot view the Bluetooth audio codec in use. However, some netizens found that macOS Catalina 10.15 can be configured to use aptX encoding.

For Android phones, you can view and configure Bluetooth related parameters in the developer options. Take Xiaomi MIUI12 system as an example, the path is Settings -> More Settings -> Developer Options.

How to choose a Bluetooth headset?

At present, the most popular TWS headsets are mostly mobile phone manufacturer brands, so it is natural to recommend which headset to use which mobile phone is used, and there will be many functions that match their own mobile phones.

If you use an Apple device, it is sufficient to use headphones that support AAC, and headphones that meet the Hi-Res Audio Wireless small gold standard are super-matched. And if it is a newer Android phone, you can choose a headset that supports aptX and LADC encoding if you are pursuing better Bluetooth sound quality. Support aptX headset body will have the logo as shown below. And products with Hi-Res Audio logo must support LDAC or LHDC. 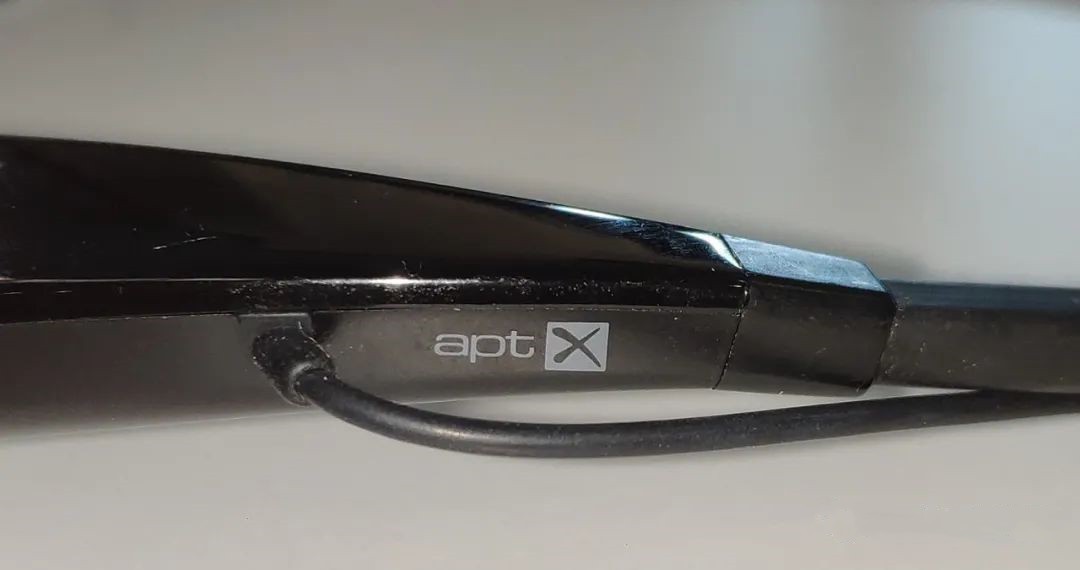 What are the advantages and disadvantages of Bluetooth encoding?

There are many factors that affect the sound quality of Bluetooth. From the point of view of coding technology, we think that LHDC ≈ LDAC> aptX> AAC> SBC. In addition, on the mobile phone side, a high-bit-rate audio source is required; on the earphone side, a headphone unit with a wider frequency response is required. Even the performance of the Bluetooth antenna of the two should be considered, because most audio coding will reduce the bit rate when the Bluetooth signal is poor, and ensure the connection first.

Regarding sound quality and delay, the two cannot be achieved at the same time. If the sound quality is to be good, for example, LDAC increases the Bluetooth channel, it is susceptible to interference, and the transmission delay will also become longer. If the delay is to be low, a certain sound quality must be sacrificed.

Finally, the human ear is also very important. In fact, most people cannot tell the quality of the above-mentioned encodings blindly, and only a few people can hear the difference between Hi-Res Audio sound quality and CD sound quality.